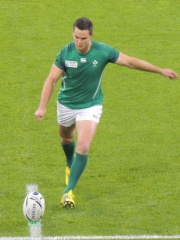 Jonathan Jeremiah Sexton (born 11 July 1985) is an Irish rugby union player who plays as a fly-half for Leinster Rugby and Ireland, and he also captains both teams. He also previously represented the British & Irish Lions in both 2013 and 2017 and has scored over 900 points in his international career, making him one of the highest points-scorers in rugby union history. Sexton was the winner of World Rugby Player of the Year in 2018, having previously been a nominee for the award in 2014. Read more on Wikipedia

Among RUGBY PLAYERS In Ireland

Among rugby players born in Ireland, Jonathan Sexton ranks 2. Before him are Brian O'Driscoll (1979).