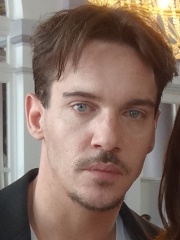 Jonathan Rhys Meyers (born Jonathan Michael Francis O'Keeffe; 27 July 1977) is an Irish actor, model and musician. He is known for his roles in the films Michael Collins (1996), Velvet Goldmine (1998), Titus (1999), Bend It Like Beckham (2002), Alexander (2004), Match Point (2005), Mission: Impossible III (2006) and his television roles as Elvis Presley in the biographical miniseries Elvis (2005), for which he won a Golden Globe Award and earned a Primetime Emmy Award nomination, as King Henry VIII in the historical drama The Tudors (2007–10), which earned him two Golden Globe Award nominations, and in the NBC drama series Dracula (2013–14) as the title character. He also starred as Bishop Heahmund, a character inspired by the Catholic Saint of the same name, in the History Channel television series Vikings.Meyers has continued to star in other films, such as Albert Nobbs in 2011. Read more on Wikipedia