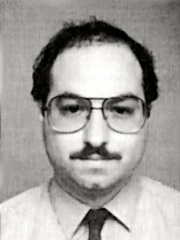 Jonathan Jay Pollard (born August 7, 1954) is a former intelligence analyst for the United States government. In 1987, as part of a plea agreement, Pollard pleaded guilty to spying for and providing top-secret classified information to Israel. He was sentenced to life in prison for violations of the Espionage Act.Pollard is the only American who has received a life sentence for passing classified information to an ally of the U.S. In defense of his actions, Pollard declared that he committed espionage only because "the American intelligence establishment collectively endangered Israel's security by withholding crucial information". Israeli officials, U.S.-Israeli activist groups, and some U.S. Read more on Wikipedia

Since 2007, the English Wikipedia page of Jonathan Pollard has received more than 949,348 page views. His biography is available in 19 different languages on Wikipedia making him the 35th most popular mafioso.