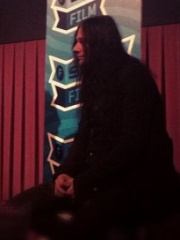 Hans Uno Jonas Åkerlund (Swedish: [hɑːns ˈʉ̌ːnʊ ˈjûːnas ˈôːkɛˌɭɵnd]; born 10 November 1965) is a Swedish film director, screenwriter, music video director, and drummer. His video for Madonna's song "Ray of Light" won a Grammy Award for Best Music Video, Short Form, and a record seven awards at 1998 MTV Video Music Awards, including the Video of the Year. In 2008 he won another Grammy Award, this time around for "Best Long Form Music Video" for another work with Madonna – directing "The Confessions Tour" DVD. In 2014 he won this Grammy Award again (that meanwhile changed the name to "Best Music Film"), this time for "Live Kisses", a Paul McCartney concert film. Read more on Wikipedia

Since 2007, the English Wikipedia page of Jonas Åkerlund has received more than 678,678 page views. His biography is available in 22 different languages on Wikipedia making him the 764th most popular film director.

Among FILM DIRECTORS In Sweden