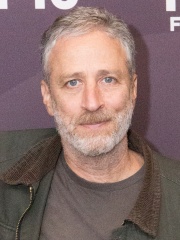 Jon Stewart (born Jonathan Stuart Leibowitz; November 28, 1962) is an American comedian, writer, producer, director, political commentator, actor, and television host. He hosted The Daily Show, a satirical news program on Comedy Central, from 1999 to 2015. Stewart started as a stand-up comedian but branched into television as host of Short Attention Span Theater for Comedy Central. He went on to host The Jon Stewart Show and then You Wrote It, You Watch It, both on MTV. Read more on Wikipedia

Since 2007, the English Wikipedia page of Jon Stewart has received more than 7,363,159 page views. His biography is available in 48 different languages on Wikipedia making him the 41st most popular presenter.