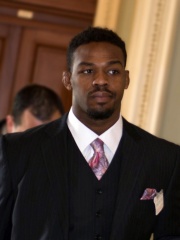 Jonathan Dwight Jones (born July 19, 1987) is an American professional mixed martial artist currently signed to the Ultimate Fighting Championship, where he competes in the light heavyweight division. Widely regarded as one of the greatest mixed martial artists ever, he is the former two-time UFC Light Heavyweight Champion. Jones first held the title from March 2011 to April 2015, and then from December 2018 to when he vacated the title on August 17, 2020. Read more on Wikipedia

Since 2007, the English Wikipedia page of Jon Jones has received more than 14,735,360 page views. His biography is available in 25 different languages on Wikipedia making him the 43rd most popular martial arts.

Among MARTIAL ARTS In United States