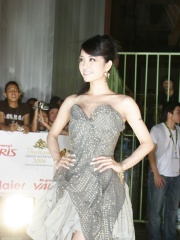 Jolin Tsai (; Chinese: 蔡依林; born September 15, 1980) is a Taiwanese singer, songwriter, dancer, actress, and businesswoman. Tsai is known for frequently reinventing both her music and image, and she is cited as a huge role of popularizing dance-pop as mainstream popular music in Greater China. She maintains her autonomy within the recording industry, and her musical productions have received widespread critical acclaim. Read more on Wikipedia

Since 2007, the English Wikipedia page of Jolin Tsai has received more than 802,129 page views. Her biography is available in 78 different languages on Wikipedia making her the 1,216th most popular musician.

Among MUSICIANS In Taiwan

Among musicians born in Taiwan, Jolin Tsai ranks 2. Before her are Jay Chou (1979).