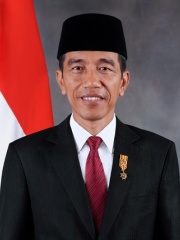 Joko Widodo (Indonesian: [dʒɔkɔ widɔdɔ]; born 21 June 1961), also known as Jokowi, is an Indonesian politician and businessman who is the 7th and current president of Indonesia. Elected in July 2014, he was the first Indonesian president not to come from an elite political or military background. He was previously the Mayor of Surakarta from 2005 to 2012 and the Governor of Jakarta from 2012 to 2014. Read more on Wikipedia

Joko Widodo is most famous for being the president of Indonesia.

Among politicians, Joko Widodo ranks 3,006 out of 15,710. Before him are Dred Scott, Mohamed Farrah Aidid, Berenice III of Egypt, Felipe González, Pekah, and Adélaïde of France. After him are Francis, Count of Vendôme, Winnie Madikizela-Mandela, Nectanebo II, Omri, Carin Göring, and William Pitt the Younger.