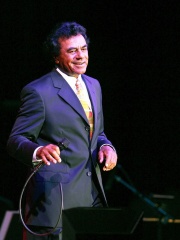 John Royce Mathis (born September 30, 1935) is an American singer of popular music. Starting his career with singles of standard music, he became highly popular as an album artist, with several dozen of his albums achieving gold or platinum status and 73 making the Billboard charts. According to Guinness Music writer and charts historian Paul Gambaccini, Mathis has sold over 400 million records worldwide to date, making him the third-biggest selling artist of the 20th century after Elvis Presley and Frank Sinatra. Read more on Wikipedia

Among singers, Johnny Mathis ranks 930 out of 3,541. Before him are Mel B, Indila, Rosario Flores, Mango, Aino Ackté, and Sandra Kim. After him are Betty Curtis, Lucho Gatica, Ian Hunter, Sumi Jo, Chiquito de la Calzada, and Nora Brockstedt.