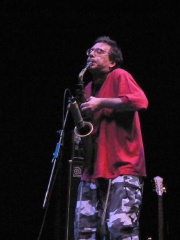 John Zorn (born September 2, 1953) is an American composer, conductor, saxophonist, arranger, multi-instrumentalist, producer and dedicated improviser that deliberately resists category. Zorn's avant-garde and experimental approaches to composition and improvisation are inclusive of jazz, rock, hardcore, classical, contemporary, surf, metal, soundtrack, ambient, and world music. In 2013, Down Beat described Zorn as "one of our most important composers" and in 2020 Rolling Stone noted "Though Zorn has operated almost entirely outside the mainstream, he’s gradually asserted himself as one of the most influential musicians of our time".Zorn entered New York City's downtown music scene in the mid-1970s, collaborating with improvising artists while developing new methods of composing experimental music. Read more on Wikipedia