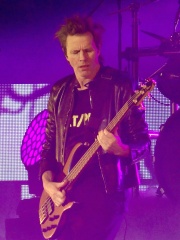 Nigel John Taylor (born 20 June 1960) is an English musician, singer, songwriter, producer, and actor, who is best known as the bass guitarist for new romantic band Duran Duran, of which he was a founding member. Duran Duran was one of the most popular bands in the world during the 1980s due in part to their revolutionary music videos which played in heavy rotation in the early days of MTV. Taylor played with Duran Duran from its founding in 1978 until 1997, when he left to pursue a solo recording and film career. He recorded a dozen solo releases (albums, EPs, and video projects) through his private record label B5 Records over the next four years, had a lead role in the movie Sugar Town, and made appearances in a half dozen other film projects. Read more on Wikipedia

Since 2007, the English Wikipedia page of John Taylor has received more than 92,699 page views. His biography is available in 19 different languages on Wikipedia making him the 1,440th most popular musician.