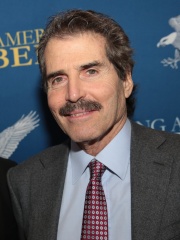 John Frank Stossel (born March 6, 1947) is an American consumer television personality, author, and libertarian pundit, known for his career on both ABC News and Fox Business Channel. Stossel's style combines reporting and commentary. It reflects a libertarian political philosophy and views on economics which are largely supportive of the free market. Read more on Wikipedia

Since 2007, the English Wikipedia page of John Stossel has received more than 1,117,950 page views. His biography is available in 17 different languages on Wikipedia making him the 4,799th most popular writer.

Among writers, John Stossel ranks 4,791 out of 4,883. Before him are Giorgio A. Tsoukalos, Lionel Shriver, Ken MacLeod, Catherine Asaro, Henriett Seth F., and Lui Morais. After him are Han Han, Alfred Gough, Edward Kitsis, Tom Rob Smith, Geoffrey A. Landis, and Rick Falkvinge.