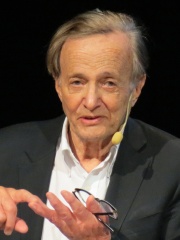 John Charles Polanyi, (born 23 January 1929) is a Hungarian-Canadian chemist who won the 1986 Nobel Prize in Chemistry, for his research in chemical kinetics. Polanyi was born in Berlin, Germany prior to his family emigrating in 1933 to the United Kingdom where he was subsequently educated at the University of Manchester, and did postdoctoral research at the National Research Council in Canada and Princeton University in New Jersey. Polanyi's first academic appointment was at the University of Toronto, and he remains there as of 2019. Read more on Wikipedia

Since 2007, the English Wikipedia page of John Polanyi has received more than 107,303 page views. His biography is available in 44 different languages on Wikipedia making him the 222nd most popular chemist.