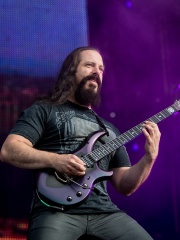 John Peter Petrucci (born July 12, 1967) is an American guitarist, composer and producer. He is best known as a founding member of the progressive metal band Dream Theater. He produced or co-produced (often with former member Mike Portnoy before he departed the band in 2010) all of Dream Theater's albums from Metropolis Pt. Read more on Wikipedia

Since 2007, the English Wikipedia page of John Petrucci has received more than 1,205,359 page views. His biography is available in 39 different languages on Wikipedia making him the 644th most popular musician.

Among musicians, John Petrucci ranks 644 out of 2,258. Before him are Glenn Frey, Walter Gieseking, Willi Boskovsky, Osvaldo Pugliese, Hugh McDonald, and Paco Ibáñez. After him are András Schiff, Vinnie Vincent, Kid Ory, David A. Stewart, Nick Simper, and James Burton.