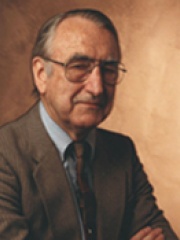 John William Money (8 July 1921 – 7 July 2006) was a New Zealand American psychologist, sexologist and author specializing in research into sexual identity and biology of gender. He was one of the first researchers to publish theories on the influence of societal constructs of "gender" on individual formation of gender identity. Money introduced the terms gender identity, gender role and sexual orientation and popularised the term paraphilia.Recent academic studies have criticized Money's work in many respects, particularly in regard to his involvement with the involuntary sex-reassignment of the child David Reimer, his forcing this child and his brother to simulate sex acts which Money photographed and the adult suicides of both brothers.Money's writing has been translated into many languages and includes around 2,000 articles, books, chapters and reviews. Read more on Wikipedia

Since 2007, the English Wikipedia page of John Money has received more than 1,115,779 page views. His biography is available in 19 different languages on Wikipedia making him the 134th most popular psychologist.

Among PSYCHOLOGISTS In New Zealand