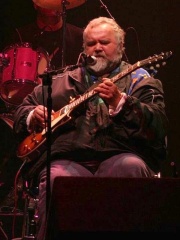 Iain David McGeachy (11 September 1948 – 29 January 2009), known professionally as John Martyn, was a British singer-songwriter and guitarist. Over a 40-year career, he released 23 studio albums, and received frequent critical acclaim. The Times described him as "an electrifying guitarist and singer whose music blurred the boundaries between folk, jazz, rock and blues".Martyn began his career at age 17 as a key member of the British folk music scene, drawing inspiration from American blues and English traditional music, and signed with Island Records. Read more on Wikipedia

Since 2007, the English Wikipedia page of John Martyn has received more than 967,454 page views. His biography is available in 23 different languages on Wikipedia making him the 1,370th most popular musician.