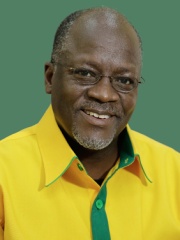 John Pombe Joseph Magufuli (29 October 1959 – 17 March 2021) was the fifth president of Tanzania, serving from 2015 until his death in 2021. He served as Minister of Works, Transport and Communications from 2000 to 2005 and 2010 to 2015 and was chairman of the Southern African Development Community from 2019 to 2020.First elected as a Member of Parliament in 1995, he served in the Cabinet of Tanzania as Deputy Minister of Works from 1995 to 2000, Minister of Works from 2000 to 2005, Minister of Lands and Human Settlement from 2006 to 2008, Minister of Livestock and Fisheries from 2008 to 2010, and as Minister of Works for a second time from 2010 to 2015.Running as the candidate of Chama Cha Mapinduzi (CCM), the country's dominant party, Magufuli won the October 2015 presidential election and was sworn in on 5 November 2015; he was re-elected in 2020. He ran on a platform of reducing government corruption and spending while also investing in Tanzania's industries, but his rule had autocratic tendencies, as seen in restrictions on freedom of speech, restrictions on LGBT rights, and a crackdown on members of the political opposition and civil society groups.Under his presidency, Tanzania experienced one of the strongest economic growths on the continent (6% on average per year according to the IMF) and moved from the category of low-income countries to middle-income countries.Contrary to leaders elsewhere in the world, Magufuli ordered COVID-19 testing to stop and resisted calls to implement public health measures during the COVID-19 pandemic in Tanzania. Read more on Wikipedia

Among politicians, John Magufuli ranks 8,335 out of 15,710. Before him are Iwakura Tomomi, Kais Saied, Henry Addington, 1st Viscount Sidmouth, Thelma Schoonmaker, Assaracus, and Andrey II of Vladimir. After him are King Yi of Zhou, Frederick, Prince of Hohenzollern, Anatoly Dobrynin, Al-Akhtal al-Taghlibi, Café Filho, and Bethuel.