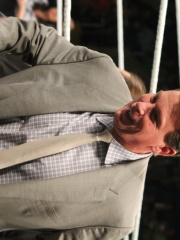 John Charles Layfield (born November 29, 1966), better known by the ring name John "Bradshaw" Layfield (abbreviated JBL), is an American businessman, television personality, and retired professional wrestler signed to WWE. Layfield is currently a financial commentator featured regularly on Fox News Channel and Fox Business Network. He is also employed by Northeast Securities as its Senior Vice President.Layfield rose to prominence in WWE (then the World Wrestling Federation, WWF) during its Attitude Era under the ring name Bradshaw, during which time he became a three-time WWF Tag Team Champion with Ron "Faarooq" Simmons as part of the Acolytes Protection Agency (APA). In 2004, the APA separated and Layfield was rebranded as JBL – a wealthy, big mouthed businessman – based on Layfield's real-life accomplishments as a stock market investor. Read more on Wikipedia