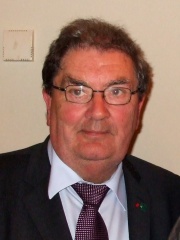 John Hume (18 January 1937 – 3 August 2020) was an Irish nationalist politician from Northern Ireland, widely regarded as one of the most important figures in the recent political history of Ireland, as one of the architects of the Northern Ireland peace process. A native of Derry, he was a founding member of the Social Democratic and Labour Party (SDLP), and served as its second leader from 1979 to 2001. Read more on Wikipedia

Among politicians, John Hume ranks 9,350 out of 15,577. Before him are Haim Bar-Lev, Şükrü Saracoğlu, Bujar Nishani, Johannes van den Bosch, Rurik Rostislavich, and Michel Micombero. After him are Gessius Florus, Michael Krešimir II of Croatia, Zheng Keshuang, Prince Koreyasu, John I, Duke of Saxony, and Srinagarindra.