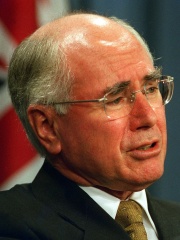 John Winston Howard (born 26 July 1939) is an Australian former politician who served as the 25th prime minister of Australia from 1996 to 2007, holding office as leader of the Liberal Party of Australia. His eleven-year tenure as prime minister is the second-longest in history, behind only Sir Robert Menzies, who served for eighteen non-consecutive years. Read more on Wikipedia

Among politicians, John Howard ranks 7,654 out of 15,710. Before him are Odo de St Amand, Peter I, Duke of Brittany, Sunifred, Count of Barcelona, Valdis Zatlers, Henry Beaufort, and Alfonso López Michelsen. After him are Gotō Shinpei, Isagoras, Richard Hildebrandt, Ludovic Orban, K. Kamaraj, and Waldemar, Margrave of Brandenburg-Stendal.