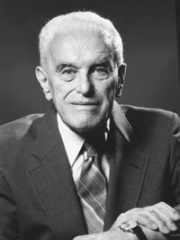 John Charles Harsanyi (Hungarian: Harsányi János Károly; May 29, 1920 – August 9, 2000) was a Hungarian Nobel Prize laureate economist. He moved to the United States in 1956, and spent most of his life there. He is best known for his contributions to the study of game theory and its application to economics, specifically for his developing the highly innovative analysis of games of incomplete information, so-called Bayesian games. Read more on Wikipedia

John Harsanyi was a Hungarian-born economist who is most famous for his contributions to game theory. He created the Nash Equilibrium, which is a solution to a game in which both players have made the best possible decision given the other player's move.

Among ECONOMISTS In Hungary

Among economists born in Hungary, John Harsanyi ranks 2. Before him are János Kornai (1928). After him are Nicholas Kaldor (1908).