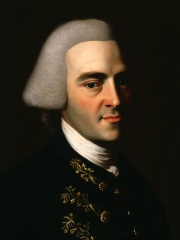 John Hancock (January 23, 1737 [O.S. January 12, 1736] – October 8, 1793) was an American merchant, statesman, and prominent Patriot of the American Revolution. He served as president of the Second Continental Congress and was the first and third Governor of the Commonwealth of Massachusetts. He is remembered for his large and stylish signature on the United States Declaration of Independence, so much so that the term "John Hancock" has become a synonym in the United States for one's signature.Before the American Revolution, Hancock was one of the wealthiest men in the Thirteen Colonies, having inherited a profitable mercantile business from his uncle. Read more on Wikipedia

Since 2007, the English Wikipedia page of John Hancock has received more than 2,693,251 page views. His biography is available in 38 different languages on Wikipedia making him the 5,068th most popular politician.

Among politicians, John Hancock ranks 5,038 out of 14,801. Before him are Hugh I, Duke of Burgundy, Stepan Shaumian, Publius Cornelius Lentulus Sura, Trần Hưng Đạo, Francesco I d'Este, Duke of Modena, and Hosius of Corduba. After him are Ashot I of Armenia, Ragnvald Knaphövde, Odo I, Duke of Burgundy, Giovanni Leone, Yolande of Valois, and Theudigisel.