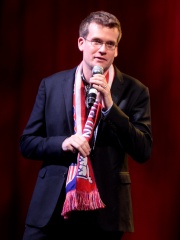 John Michael Green (born August 24, 1977) is an American author and YouTube content creator. He won the 2006 Printz Award for his debut novel, Looking for Alaska, and his fourth solo novel, The Fault in Our Stars, debuted at number one on The New York Times Best Seller list in January 2012. The 2014 film adaptation opened at number one at the box office. Read more on Wikipedia

Since 2007, the English Wikipedia page of John Green has received more than 170,938 page views. His biography is available in 49 different languages on Wikipedia making him the 3,533rd most popular writer.

Among writers, John Green ranks 3,528 out of 4,883. Before him are Wen Yiduo, Sandra Brown, Edwin Atherstone, Oskar Luts, Brandon Sanderson, and Eduardo Pondal. After him are Deon Meyer, E. L. James, George Gissing, Radclyffe Hall, Per Petterson, and Mordecai Richler.