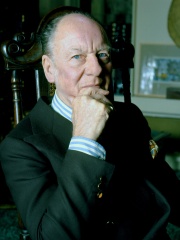 Sir Arthur John Gielgud, OM, CH (; 14 April 1904 – 21 May 2000) was an English actor and theatre director whose career spanned eight decades. With Ralph Richardson and Laurence Olivier, he was one of the trinity of actors who dominated the British stage for much of the 20th century. A member of the Terry family theatrical dynasty, he gained his first paid acting work as a junior member of his cousin Phyllis Neilson-Terry's company in 1922. Read more on Wikipedia

Since 2007, the English Wikipedia page of John Gielgud has received more than 1,778,567 page views. His biography is available in 51 different languages on Wikipedia making him the 534th most popular actor.