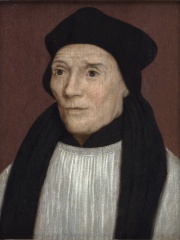 John Fisher (c. 19 October 1469 – 22 June 1535), was an English Catholic bishop, cardinal, and theologian. Fisher was also an academic, and eventually served as Chancellor of the University of Cambridge. Read more on Wikipedia

Among people born in 1469, John Fisher ranks 6. Before him are Niccolò Machiavelli, Manuel I of Portugal, Guru Nanak, Gian Galeazzo Sforza, and Thomas Cajetan. After him are Rodrigo de Triana, Ishak Pasha, Francesco Granacci, and Elia Levita. Among people deceased in 1535, John Fisher ranks 8. Before him are Heinrich Cornelius Agrippa, Kamāl ud-Dīn Behzād, Francesco II Sforza, Lorenzo Costa, Joachim I Nestor, Elector of Brandenburg, and Catherine of Saxe-Lauenburg. After him are Ippolito de' Medici, Bartolomeo Tromboncino, and Gustav Trolle.