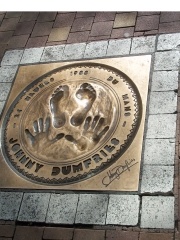 John Colum Crichton-Stuart, 7th Marquess of Bute (26 April 1958 – 22 March 2021), styled Earl of Dumfries before 1993, was a Scottish peer and a racing driver, most notably winning the 1988 24 Hours of Le Mans. He did not use his title and preferred to be known solely as John Bute, although he had previously been called Johnny Dumfries before his accession to the Marquessate. The family home is Mount Stuart House on the Isle of Bute. Read more on Wikipedia

Since 2007, the English Wikipedia page of John Crichton-Stuart, 7th Marquess of Bute has received more than 434,495 page views. His biography is available in 20 different languages on Wikipedia (up from 18 in 2019). John Crichton-Stuart, 7th Marquess of Bute is the 617th most popular racing driver (up from 639th in 2019), the 4,600th most popular biography from United Kingdom (down from 4,070th in 2019) and the 103rd most popular British Racing Driver.