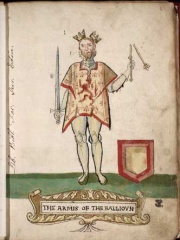 John Balliol (c. 1249 – late 1314), known derisively as Toom Tabard (meaning "empty coat"), was King of Scots from 1292 to 1296. Little is known of his early life. After the death of Margaret, Maid of Norway, Scotland entered an interregnum during which several competitors for the Crown of Scotland put forward claims. Read more on Wikipedia

Since 2007, the English Wikipedia page of John Balliol has received more than 936,805 page views. His biography is available in 43 different languages on Wikipedia. John Balliol is the 2,850th most popular politician (up from 2,966th in 2019), the 672nd most popular biography from United Kingdom (down from 663rd in 2019) and the 118th most popular British Politician.

Among politicians, John Balliol ranks 2,850 out of 15,710. Before him are Charles William Ferdinand, Duke of Brunswick, Alexander I of Epirus, Theudebert I, Helenus, Princess María de las Mercedes of Bourbon-Two Sicilies, and Necho I. After him are Tiridates III of Armenia, Baldwin I, Margrave of Flanders, Yoweri Museveni, Lennart Johansson, Frederick Augustus III of Saxony, and Michael D. Higgins.

Among people born in 1249, John Balliol ranks 3. Before him are Eric V of Denmark and Constance of Sicily, Queen of Aragon. After him are Amadeus V, Count of Savoy, Robert III, Count of Flanders, Zhu Shijie, Frederick I, Margrave of Baden, and Emperor Kameyama. Among people deceased in 1314, John Balliol ranks 4. Before him are Philip IV of France, Pope Clement V, and Jacques de Molay. After him are Rainier I of Monaco, Lord of Cagnes, Albert II, Margrave of Meissen, Zhu Shijie, and Helen of Anjou.