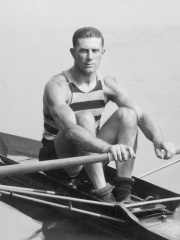 John Brendan Kelly Sr. (October 4, 1889 – June 20, 1960), known as Jack Kelly, was an American triple Olympic champion, the first in the sport of rowing. The Philadelphia-based Kelly also was a multimillionaire in the bricklaying and construction industry. He was the father of actress Grace Kelly, Princess of Monaco (thus maternal grandfather of Albert II, Prince of Monaco), and of John B. Kelly Jr., an accomplished rower who served as president of the U.S. Read more on Wikipedia

Page views of John B. Kelly Sr.s by language

Among politicians, John B. Kelly Sr. ranks 7,152 out of 15,577. Before her are Ivan Goremykin, Otto I, Margrave of Brandenburg, Giorgi Saakadze, Daniel Inouye, Kristján Eldjárn, and Song Jiaoren. After her are Berenguer Ramon II, Count of Barcelona, Prince Richard, Duke of Gloucester, Man Chong, Ashur-uballit II, Fethi Okyar, and Henry III, Duke of Brabant.