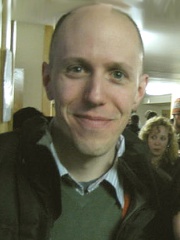 John August is an American screenwriter, director, producer, and novelist. He is known for writing the films Go (1999), Charlie's Angels (2000), Charlie's Angels: Full Throttle (2003), Big Fish (2003), Charlie and the Chocolate Factory (2005), Frankenweenie (2012), the Disney live-action adaptation of Aladdin (2019) and the novel Arlo Finch in the Valley of Fire (2018). He hosts the popular screenwriting podcast Scriptnotes with Craig Mazin, maintains an eponymous screenwriting blog and develops screenwriter-targeted software through his company, Quote-Unquote Apps.He is a member of the Academy of Motion Picture Arts and Sciences, voting in the Writers branch. Read more on Wikipedia

Since 2007, the English Wikipedia page of John August has received more than 255,881 page views. His biography is available in 17 different languages on Wikipedia making him the 1,264th most popular film director.