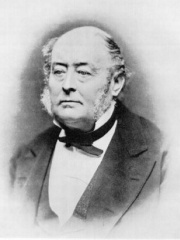 Johann Jakob Bachofen (22 December 1815 – 25 November 1887) was a Swiss antiquarian, jurist, philologist, anthropologist, and professor for Roman law at the University of Basel from 1841 to 1845. Bachofen is most often connected with his theories surrounding prehistoric matriarchy, or Das Mutterrecht, the title of his seminal 1861 book Mother Right: an investigation of the religious and juridical character of matriarchy in the Ancient World. Bachofen assembled documentation demonstrating that motherhood is the source of human society, religion, morality, and decorum. Read more on Wikipedia

Johann Jakob Bachofen is most famous for his book "Das Mutterrecht" which was published in 1861. He argued that archaic societies were matriarchal and that the shift to patriarchy was a result of the introduction of agriculture.

Among historians, Johann Jakob Bachofen ranks 69 out of 339. Before him are Heinrich Wölfflin, Henri Pirenne, Bernard Lewis, Theophylact Simocatta, Al-Baladhuri, and Nicolaus of Damascus. After him are Al-Dhahabi, Movses Khorenatsi, Erich Auerbach, Carlo Ginzburg, Eutropius, and Donna Haraway.

Among HISTORIANS In Switzerland

Among historians born in Switzerland, Johann Jakob Bachofen ranks 3. Before him are Jacob Burckhardt (1818) and Heinrich Wölfflin (1864). After him are Florian Cajori (1859).