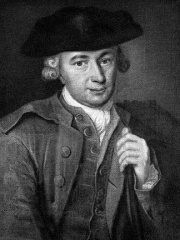 Johann Georg Hamann (; German: [ˈhaːman]; 27 August 1730 – 21 June 1788) was a German Lutheran philosopher from Königsberg known as "the Wizard of the North" who was one of the leader figures of post-Kantian philosophy. His work was used by his student J. G. Herder as the main support of the Sturm und Drang movement, and is associated with the Counter-Enlightenment and Romanticism.He introduced Kant, also from Königsberg, to the works of both Hume – waking him from his "dogmatic slumber" – and Rousseau. Hamann was influenced by Hume, but he used his views to argue for rather than against Christianity.Goethe and Kierkegaard were among those who considered him to be the finest mind of his time. Read more on Wikipedia

Johann Georg Hamann is most famous for his work as a philosopher, theologian, and literary critic. He is often considered the father of modern literary criticism.