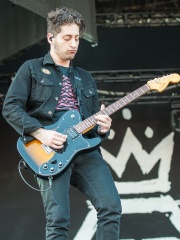 Joseph Mark Trohman (born September 1, 1984) is an American guitarist, singer, and record producer. He is best known as the lead guitarist and backing vocalist of the American rock band Fall Out Boy, as well as the lead and rhythm guitarist for a heavy metal supergroup The Damned Things. Fall Out Boy began as Trohman and Pete Wentz's side project from the hardcore punk scene they were involved with, and the band has scored four number one albums on the US Billboard 200, as well as numerous platinum and multi platinum singles in the US and abroad. Read more on Wikipedia

Since 2007, the English Wikipedia page of Joe Trohman has received more than 787,653 page views. His biography is available in 18 different languages on Wikipedia making him the 2,201st most popular musician.

Among musicians, Joe Trohman ranks 2,207 out of 2,258. Before him are Sam Tsui, Adam Dutkiewicz, Sylwia Grzeszczak, Space Cowboy, Corey Beaulieu, and Will Boyd. After him are Kate Voegele, High Contrast, Lianne La Havas, Panda Bear, Greyson Chance, and Andy C.