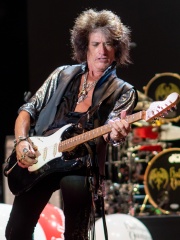 Joseph Anthony Pereira (born September 10, 1950), professionally known as Joe Perry, is an American musician and songwriter who is best known as the founding member, lead guitarist, backing and occasional lead vocalist of the American rock band Aerosmith.Perry also has his own solo band called The Joe Perry Project, and is a member of the All-Star band Hollywood Vampires with Alice Cooper and Johnny Depp. He was ranked 84th in Rolling Stone's list of The 100 Greatest Guitarists of All Time and in 2001, was inducted into the Rock and Roll Hall of Fame as part of Aerosmith. In 2013, Perry and his songwriting partner Steven Tyler were recipients of the ASCAP Founders Award and were also inducted into the Songwriters Hall of Fame. Read more on Wikipedia