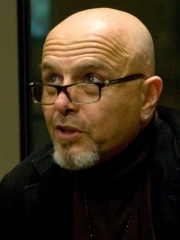 Joseph Peter Pantoliano (born September 12, 1951) is an American character actor who has appeared in over 150 films, television and stage productions.After his early roles in the television series M*A*S*H and the 1983 comedy Risky Business, he gained recognition for his numerous supporting roles in high-profile films and television series; including Hill Street Blues, The Goonies, La Bamba, Empire of the Sun, The Fugitive, NYPD Blue, Memento, and Bad Boys and its sequels. He starred as Caesar in the Wachowskis' directorial debut Bound and played Cypher in their second film The Matrix (1999) and Michael Gorski in their Netflix series, Sense8 (2015–2018). Read more on Wikipedia