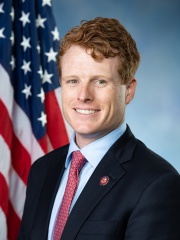 Joseph Patrick Kennedy III (born October 4, 1980) is an American lawyer and politician serving as the U.S. Representative for Massachusetts's 4th congressional district since 2013. A member of the Democratic Party, he represents a congressional district that extends from the western suburbs of Boston to the state's South Coast. A son of former Representative Joseph P. Kennedy II, he worked as a Peace Corps volunteer and as an assistant district attorney in the Cape and Islands and Middlesex County, Massachusetts offices before his election to Congress. Kennedy is a grandson of U.S. Senator and United States Attorney General Robert F. Kennedy, a grand-nephew of 35th President of the United States John F. Kennedy and U.S. Senator Ted Kennedy, and a great-grandson of Joseph Patrick Kennedy, U.S. Read more on Wikipedia

Since 2007, the English Wikipedia page of Joe Kennedy III has received more than 3,856,201 page views. His biography is available in 21 different languages on Wikipedia making him the 14,297th most popular politician.