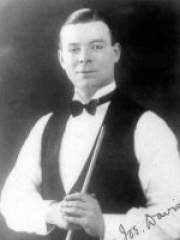 Joseph Davis (15 April 1901 – 10 July 1978) was an English professional snooker and English billiards player. He was the dominant figure in snooker from the 1920s to the 1950s and has been credited with inventing aspects of the way the game is now played, such as break-building. With equipment manufacturer Bill Camkin, he drove the creation of the World Snooker Championship by persuading the Billiards Association and Control Council to recognise an official professional snooker championship in 1927. Read more on Wikipedia

Among politicians, Joe Davis ranks 6,481 out of 15,710. Before him are Adolph John I, Count Palatine of Kleeburg, Jan Zamoyski, García Fernández of Castile, Anton Korošec, Bairam Khan, and Marien Ngouabi. After him are Maxwell D. Taylor, Alois Eliáš, Antalcidas, George Wallace, Hor, and Jonas Furrer.