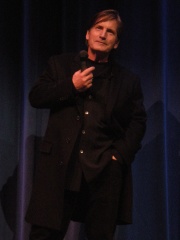 Joseph Angelo D'Allesandro III (born December 31, 1948) is an American actor and Warhol superstar. Having also crossed over into mainstream roles like mobster Lucky Luciano in The Cotton Club, Dallesandro is generally considered to be the most famous male sex symbol of American underground films of the 20th century, as well as a sex symbol of gay subculture.Dallesandro starred in the 1968 film produced by Andy Warhol, Flesh, as a teenage street hustler. Rolling Stone in 1970 declared his second starring vehicle, Trash, the "Best Film of the Year", making him a star of the youth culture, sexual revolution and subcultural New York City art collective of the 1970s. Read more on Wikipedia