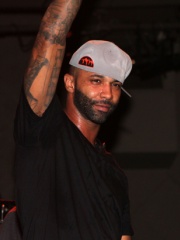 Joseph Anthony Budden II (born August 31, 1980) is an American media personality and former rapper. He first gained recognition as a rapper with his 2003 top 40 single "Pump It Up" and as a member of the hip hop supergroup Slaughterhouse. In 2018, he retired from rap, and found success as a broadcaster, having a much publicized run as a co-host on Everyday Struggle for Complex. Read more on Wikipedia

Among singers, Joe Budden ranks 3,665 out of 3,528. Before him are Ekaterina Ryabova, Sieneke, Amos Lee, Uffie, Jessica Mauboy, and Nina Sublatti. After him are Kimberley Walsh, Daya, Gabrielle Aplin, Stevan Faddy, Bun B, and Kid Ink.