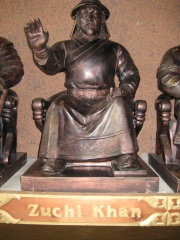 Since 2007, the English Wikipedia page of Jochi has received more than 893,883 page views. His biography is available in 52 different languages on Wikipedia (up from 51 in 2019). Jochi is the 27th most popular military personnel (up from 31st in 2019), the 5th most popular biography from Mongolia and the 2nd most popular Military Personnel.

Jochi is most famous for being the son of Genghis Khan and his first wife, Borte.

Page views of Jochis by language

Among military personnels, Jochi ranks 27 out of 1,468. Before him are Ptolemy I Soter, Pyrrhus of Epirus, Cao Cao, Charles XIV John of Sweden, Cesare Borgia, and Simo Häyhä. After him are Wilhelm Keitel, Friedrich Paulus, Tokugawa Ieyasu, Vercingetorix, Douglas MacArthur, and Lü Bu.

Among people born in 1181, Jochi ranks 1. After him are Irene Angelina, Ibn al-Farid, and Marino Morosini. Among people deceased in 1227, Jochi ranks 2. Before him is Genghis Khan. After him are Pope Honorius III, Leszek the White, Louis IV, Landgrave of Thuringia, Qiu Chuji, Henry V, Count Palatine of the Rhine, Abdallah al-Adil, Al-Mu'azzam Isa, Marco I Sanudo, Renaud I, Count of Dammartin, and Demetrius of Montferrat.