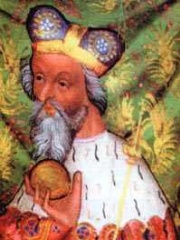 Jobst of Moravia (Czech: Jošt Moravský or Jošt Lucemburský; German: Jo(b)st or Jodokus von Mähren; c. 1354 – 18 January 1411), a member of the House of Luxembourg, was Margrave of Moravia from 1375, Duke of Luxembourg and Elector of Brandenburg from 1388 as well as elected King of Germany (King of the Romans) from 1410 until his death. Read more on Wikipedia

Jobst of Moravia was a bishop of the Catholic Church in the 13th century who was known for his work in the field of medicine. He is most famous for his contribution to the field of surgery, specifically for his development of the surgical glove.

Page views of Jobst of Moravias by language

Among noblemen, Jobst of Moravia ranks 178 out of 843. Before him are Nicholas Alexandrovich, Tsesarevich of Russia, Grand Duke Konstantin Nikolayevich of Russia, Prince Bertil, Duke of Halland, Maria Anna Victoria of Bavaria, Christina of Denmark, and Arthur I, Duke of Brittany. After him are Albrecht III Achilles, Elector of Brandenburg, Ismihan Sultan, Elizabeth of Austria, Prince Leopold of Bavaria, Daniel of Moscow, and Charles, Count of Angoulême.

Among NOBLEMEN In Czechia

Among noblemen born in Czechia, Jobst of Moravia ranks 2. Before him are Archduchess Anna of Austria (1528). After him are Judith of Bohemia (1056).