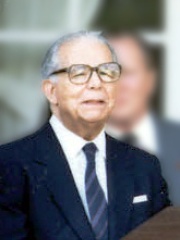 Joaquín Antonio Balaguer Ricardo (1 September 1906 – 14 July 2002) was the President of the Dominican Republic who served three non-consecutive terms for that office from 1960 to 1962, 1966 to 1978, and 1986 to 1996. His enigmatic, secretive personality inherited from the Trujillo era, as well as his desire to perpetuate himself in power through dubious elections and state terrorism, earned him the nickname of caudillo. Read more on Wikipedia

Since 2007, the English Wikipedia page of Joaquín Balaguer has received more than 327,566 page views. His biography is available in 31 different languages on Wikipedia making him the 5,540th most popular politician.

Among politicians, Joaquín Balaguer ranks 5,507 out of 14,801. Before him are Siemomysł, Tadukhipa, Countess Palatine Maria Franziska of Sulzbach, Goh Chok Tong, Sabuktigin, and Prince Philippe, Duke of Orléans. After him are Ishpuini of Urartu, Luigi Facta, Hermeric, Louis-François de Boufflers, Conrad, Duke of Lorraine, and Arnold of Torroja.

Among POLITICIANS In Dominican Republic