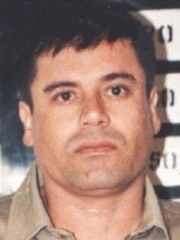 Joaquín Archivaldo Guzmán Loera (Spanish: [xoaˈkin aɾtʃiˈβaldo ɣuzˈman loˈeɾa]; born 4 April 1957), commonly known as "El Chapo" ('Shorty', pronounced [el ˈtʃapo]) because of his 168 cm (5 ft 6 in) stature, is a Mexican drug lord and former leader of the Sinaloa Cartel, an international crime syndicate. He is considered to have been the most powerful drug trafficker in the world.Guzmán was born in Sinaloa and raised in a poor farming family. He endured physical abuse at the hands of his father, and also entered the drug trade through his father, helping him grow marijuana for local dealers during his early adulthood. Read more on Wikipedia

Joaquín "el chapo" Guzmán is most famous for being the leader of the Sinaloa Cartel, a Mexican drug trafficking organization. He was arrested in 1993 and then escaped from prison in 2001. He was recaptured in 2014.

Among MAFIOSOS In Mexico

Among mafiosos born in Mexico, Joaquín "El Chapo" Guzmán ranks 1. After him are Amado Carrillo Fuentes (1956).