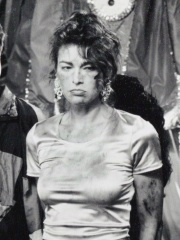 Joanna Pacuła (Polish: [jɔˈanːa paˈt͡suwa]; born 30 December 1957) is a Polish-American actress and model. Born in Tomaszów Lubelski and emigrating to the United States in the early 1980s, she first gained prominence through her modeling work for Vogue. Her breakthrough performance in the 1983 film Gorky Park earned her a Golden Globe nomination for Best Supporting Actress in a Motion Picture. Read more on Wikipedia

Among actors, Joanna Pacuła ranks 3,784 out of 10,030. Before her are Girish Karnad, Benedicta Boccoli, So Ji-sub, Julia Louis-Dreyfus, Zhao Wei, and JoBeth Williams. After her are Kader Khan, Bhupen Hazarika, Gheorghe Mureșan, Ben Miller, Arlene Dahl, and Eliane Giardini.