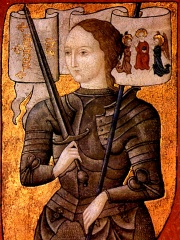 Joan of Arc (French: Jeanne d'Arc pronounced [ʒan daʁk]; c. 1412 – 30 May 1431), nicknamed "The Maid of Orléans" (French: La Pucelle d'Orléans), is considered a heroine of France for her role during the Lancastrian phase of the Hundred Years' War, and was canonized as a Roman Catholic saint. She was born to Jacques d'Arc and Isabelle Romée, a peasant family, at Domrémy in northeast France. Read more on Wikipedia

Since 2007, the English Wikipedia page of Joan of Arc has received more than 10,879,032 page views. Her biography is available in 138 different languages on Wikipedia making her the 3rd most popular military personnel.

Page views of Joan of Arcs by language

Among military personnels, Joan of Arc ranks 3 out of 1,194. Before her are Genghis Khan and Alexander the Great. After her are Timur, Charles de Gaulle, Spartacus, Chiang Kai-shek, Charles Martel, Erwin Rommel, Adolf Eichmann, William Wallace, and Themistocles.