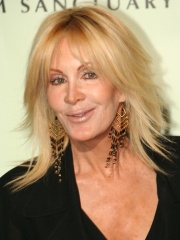 Joan Van Ark (born June 16, 1943) is an American actress, known for her role as Valene Ewing on the primetime soap opera Knots Landing. A life member of The Actors Studio, she made her Broadway debut in 1966 in Barefoot in the Park. In 1971, she received a Theatre World Award and was nominated for the Tony Award for Best Featured Actress in a Play for the revival of The School for Wives.Van Ark landed her most famous role of Valene Ewing in 1978, first on the CBS series Dallas, then for 13 seasons on its spin-off Knots Landing (1979–92). Read more on Wikipedia

Since 2007, the English Wikipedia page of Joan Van Ark has received more than 963,771 page views. Her biography is available in 17 different languages on Wikipedia making her the 4,445th most popular actor.