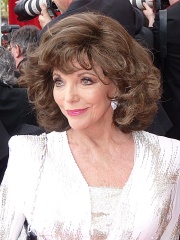 Dame Joan Henrietta Collins, (born 23 May 1933) is an English actress, author, and columnist. She made her stage debut at the age of nine, trained at the Royal Academy of Dramatic Art (RADA) in London, entered British films in 1951 and went to Hollywood under contract to 20th Century Fox in 1955. In 1981, she landed the role of Alexis Colby in the soap opera Dynasty, which made her an international superstar and brought her a Golden Globe Award for Best Actress in a Television Series – Drama in 1982. Read more on Wikipedia

Since 2007, the English Wikipedia page of Joan Collins has received more than 7,191,784 page views. Her biography is available in 41 different languages on Wikipedia making her the 449th most popular actor.