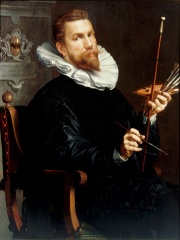 Joachim Anthoniszoon Wtewael (Dutch pronunciation: [ˈyːtəʋaːl]; also known as Uytewael [ˈœytəʋaːl]) (1566 – 1 August 1638) was a Dutch Mannerist painter and draughtsman, as well as a highly successful flax merchant, and town councillor of Utrecht. Wtewael was one of the leading Dutch exponents of Northern Mannerism, and his distinctive and attractive style remained largely untouched by the naturalistic developments happening around him, "characterized by masterfully drawn, highly polished figures often set in capricious poses". Wtewael was trained in the style of late 16th-century Haarlem Mannerism and remained essentially faithful to it, despite painting well into the early period of Dutch Golden Age painting.Altogether he has left about a hundred paintings, as well as drawings and some stained glass he designed. Read more on Wikipedia