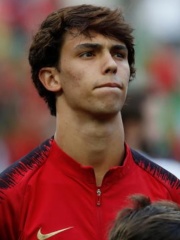 João Félix Sequeira ([ʒuˈɐ̃w ˈfɛliks]; born 10 November 1999) is a Portuguese professional footballer who plays as a forward for Spanish La Liga club Atlético Madrid and the Portugal national team. He is known for his speed, finishing, technique and his dribbling and he can also play as a winger or an attacking midfielder. He is also often referred to as Menino de Ouro (The Golden Boy) by the Portuguese and Spanish sports media.Félix initially trained at Porto's youth ranks before moving to rivals Benfica in 2015. Read more on Wikipedia

Since 2007, the English Wikipedia page of João Félix has received more than 2,197,930 page views. His biography is available in 29 different languages on Wikipedia making him the 2,900th most popular soccer player.