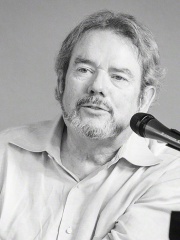 Jimmy Layne Webb (born August 15, 1946) is an American songwriter, composer, and singer. He has written numerous platinum-selling songs, including "Up, Up and Away", "By the Time I Get to Phoenix", "Wichita Lineman", "Galveston", "The Worst That Could Happen", "All I Know", and "MacArthur Park". He has had successful collaborations with Glen Campbell, Michael Feinstein, Linda Ronstadt, the 5th Dimension, Art Garfunkel, and Richard Harris.Webb was inducted into the Songwriters Hall of Fame in 1986 and the Nashville Songwriters Hall of Fame in 1990. Read more on Wikipedia

Since 2007, the English Wikipedia page of Jimmy Webb has received more than 1,319,563 page views. Her biography is available in 17 different languages on Wikipedia making her the 1,735th most popular musician.

Among musicians, Jimmy Webb ranks 1,738 out of 2,258. Before her are Lost Frequencies, Bushido, Deadmau5, Les Claypool, Jimmy Miller, and Jon Schaffer. After her are Adam Taubitz, Goldie, Robb Flynn, Joe Lovano, Randy Jackson, and Jule Styne.