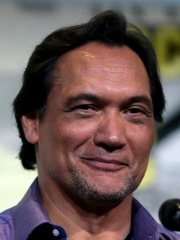 Jimmy L. Smits (born July 9, 1955) is an American actor best known for playing attorney Victor Sifuentes on the 1980s legal drama L.A. Law, NYPD Detective Bobby Simone on the 1990s police drama NYPD Blue, Matt Santos on the political drama The West Wing, Switch (1991), My Family (1995) and as ADA Miguel Prado in Dexter. He also appeared as Bail Organa in the Star Wars prequel trilogy and Rogue One. From 2012 to 2014, he joined the main cast of Sons of Anarchy as Nero Padilla. Read more on Wikipedia

Since 2007, the English Wikipedia page of Jimmy Smits has received more than 4,887,169 page views. His biography is available in 29 different languages on Wikipedia making him the 3,039th most popular actor.